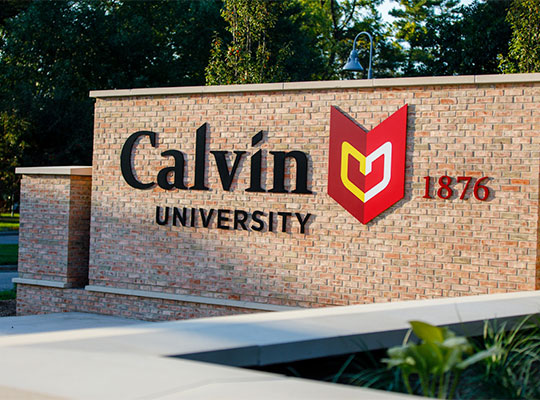 Calvin University equips students to think deeply, act justly, and live wholeheartedly as Christ’s agents of renewal in the world. We help students discover what they are called to do and develop the skills needed to fulfill their calling. Discover our online degree programs, developed to integrate faith and learning through deep thinking.

Your studies should inspire you to look at the world in new ways. At Calvin, they will. Join a Christian academic community dedicated to rigorous intellectual inquiry and committed to helping you flourish.

We are accredited by the American Chemical Society, National Association of Schools of Music, the Council for the Accreditation of Educator Preparation, and the Higher Learning Commission (HLC).

Calvin University was ranked No. 3 on the 2020 Regional Universities Midwest list by U.S. News & World Report and ranked as one of the top private schools in Michigan on The Best Colleges for Your Money list by Money Magazine.

Calvin is ranked as a 2021 top 100 university and among the best faith-based programs by Intelligent.com.

Calvin University equips students to think deeply, to act justly, and to live wholeheartedly as Christ’s agents of renewal in the world.

By 2030, Calvin will become a Christian liberal arts university with an expanded global influence. We envision Calvin University as a trusted partner for learning across religious and cultural differences and throughout the academy, the church, and the world.

Calvin University will be animated by a Christian faith that seeks understanding and promotes the welfare of the city and the healing of the world. We welcome all who are compelled by God’s work of renewal to join us in the formative pursuits of lifelong learning, teaching, scholarship, worship, and service.

To equip students to be Christ’s agents of renewal in the world, Calvin University maintains the following core values:

It started simply, as great things often do. But what began in 1876 as a school of ministry training for just seven students has emerged as a world-class Christian liberal arts institution. Our dynamic community now includes more than 3,800 passionate, creative, and engaged students—and the faculty, staff, parents, and friends who empower them.

Since its earliest stages, Calvin has embodied the multidisciplinary approach of the liberal arts. Calvin University and Seminary began as one institution—De Theologische School—in 1876, taking students through six years of curriculum that incorporated both literary and theological training.

In 1884, the school expanded to admit a student body beyond pastors in training—now including aspiring teachers. The college’s horizons expanded once again in 1900 when the curriculum further broadened to include pre-professional courses. By 1906, the literary department, which provided four years of preparatory and two years of college work, became known officially as the John Calvin Junior College, a separate entity from Calvin Theological Seminary.

In time, the institution became a four-year college. In 1931, the school was renamed Calvin College, and in 2019, it officially became Calvin University.

to speak with a knowledgeable admissions counselor.